Edit
watch 01:36
We're Getting Mutants in the MCU - The Loop
Do you like this video?
Play Sound

Mr. Dog is a kindly old fellow well-known for his role as the owner of the local store. He also rides a hot air balloon to the starting lineup, firing his gun to signal the beginning of every race. Rumors say that he used to be a very fast boarder, but no one has ever seen him on the slopes.

Mr. Dog still retains his shopkeeper role from the previous games, but like Coach, he does not contribute much to the plot. He is unlocked as a character in Battle Race mode after delivering to every mailbox in Shoot Cross. During gameplay, he has palette swaps based on a pig (Halloween costume) and a panda bear (Space costume). 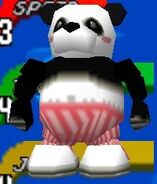